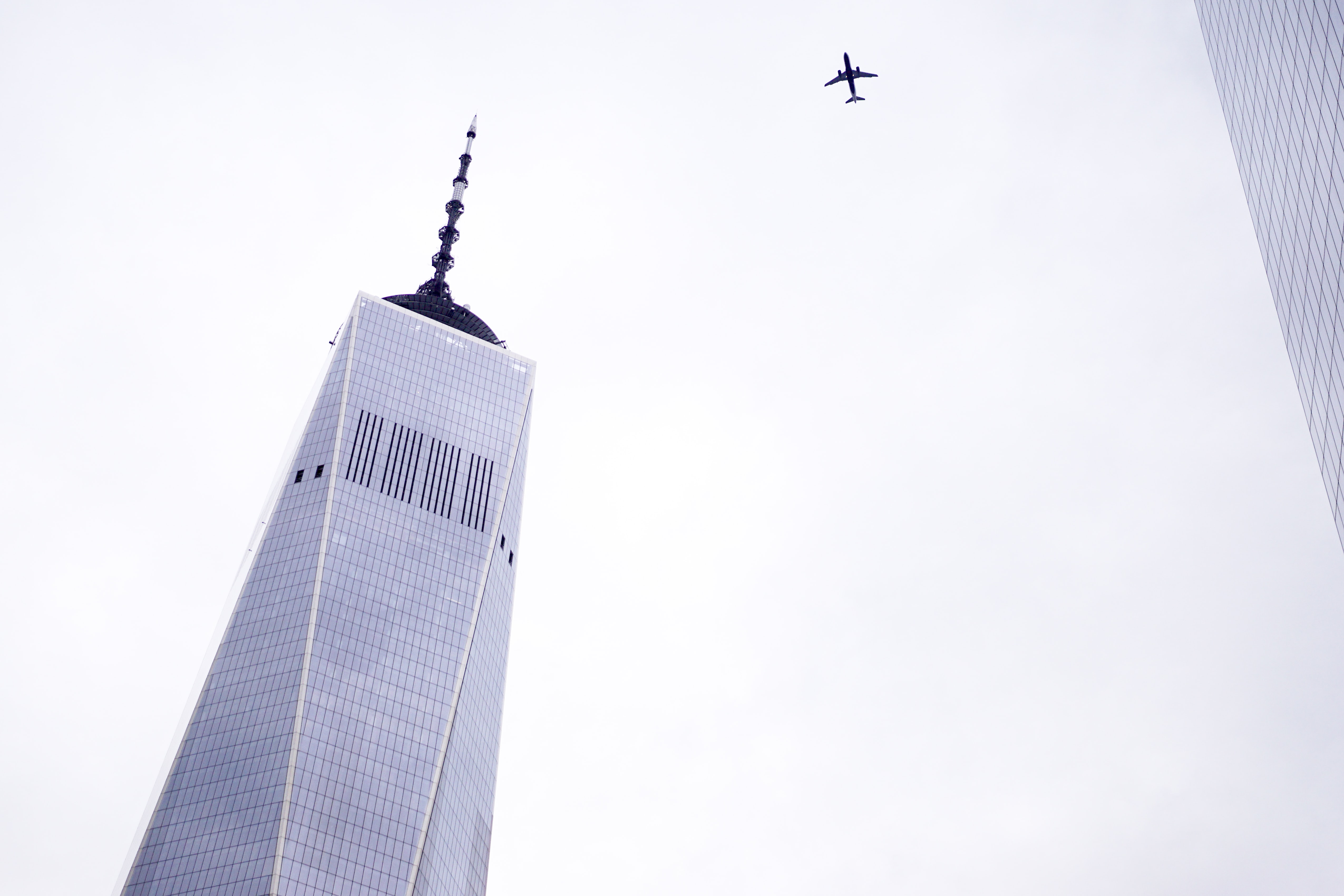 It’s hard to fathom now, but earlier in the day, travelers used to be able to arrive at the airport just minutes before a flight. There was no need for them to remove their coats and shoes as they went through a simple metal detector, and anyone could go to the boarding gate without a boarding pass or an ID.

The 19 al-Qaida-affiliated terrorists knew and exploited lax airport security measures, strolling through metal detectors at 4 security checkpoints with ease, with deadly weapons in hand. This enabled them to commandeer 4 commercial airplanes and use them as jet-filled missiles into the twin towers of the World Trade Center, the Pentagon, and a field in Shanksville, Pennsylvania.

A New Era in Airport Security

Within the next several years, many changes began taking place in airports, with the installation of machines to screen baggage for explosives, programs to arm pilots, and retrofits to make cockpits more secure. Emerging threats soon resulted in security measures that were more obvious to air travelers, namely the requirement to remove shoes during security screenings and the limits on flying with liquids.

Each new requirement seemed to make checkpoint lines longer, forcing passengers to arrive at the airport earlier if they wanted to make their flights. To many travelers, these rules were more mystifying, such as limits on liquids because the wrong ones could possibly be used to concoct a bomb.

The long lines at airports created by post-attack measures gave rise to the PreCheck and Global Entry “trusted-traveler programs” in which people who pay a fee and provide certain information about themselves pass through checkpoints without removing their shoes and jackets, or taking their laptops out of their bags.

On its application and in brief interviews, PreCheck asks people about basic information like work history and where they live, and they give a fingerprint and agree to a criminal-records check. Privacy advocates are particularly concerned about ideas that TSA has floated to also examine social media postings, press reports about people, location data, and information from data brokers, including how applicants spend their money.

At present over 10 million people have enrolled in PreCheck… and the TSA wants to raise that number to 25 million.

The goal is to let TSA officers spend more time on passengers considered to be a bigger risk. As the country marks the 20th anniversary of the attacks, the TSA’s work to expand PreCheck is unfolding in a way privacy advocates worry about putting people’s information at more risk.

At the direction of Congress, the TSA will expand the use of private vendors to gather information from PreCheck applicants. It currently uses a company called Idemia, and plans by the end of the year to add two more—Telos Identity Management Solutions and Clear Secure Inc.

Clear, which recently went public, plans to use PreCheck enrollment to boost membership in its own identity-verification product by bundling the two offerings. That will make Clear’s own product more valuable to its customers, which include sports stadiums and concert promoters.

According to India McKinney, Director of Federal Affairs for the Electronic Frontier Foundation, an advocacy group for digital rights:

“They are really trying to increase their market share by collecting quite a lot of very sensitive data on as many people as they can get their hands on. That strikes a lot of alarm bells for me.”

On the other hand, TSA Administrator David Pekoske sees Clear’s strategy as helpful for the TSA. He said:

“We have allowed the vendors to bundle their offerings together with the idea that would be an incentive for the people to sign up for the trusted-traveler programs.”

The TSA is testing the use of kiosks equipped with facial-recognition technology to check photo IDs and boarding passes rather than having an officer do it. TSA officials also told privacy advocates earlier this year that those kiosks will pull photos taken when the traveler applied for PreCheck.

However, McKinney and other critics say facial-recognition technology makes errors, especially on people of color. This concerns them because it would mean connecting the kiosks to the internet and potentially exposing consumers’ information to hackers.

Post-9/11 Era of Air Travel Security: Is it Effective or Not?

Despite having an intense desire to avoid another 9/11, the TSA has frequently been subjected to questions about its methods, ideas, and effectiveness.

In 2013, flight attendants and air marshals were outraged when the agency proposed to let passengers carry folding pocket knives and other long-banned items on planes again. Because of that, the agency dropped the idea.

Then, after another outcry, the TSA also removed full-body scanners that produced realistic-looking images that some travelers compared to virtual strip searches. They were replaced by other machines that caused fewer privacy and health objections. Pat-downs of travelers are a constant complaint.

In 2015, a published report said TSA officers failed 95% of the time to detect weapons or explosive material carried by undercover inspectors. Members of Congress who received a classified briefing raised their concerns to Pekoske, with one lawmaker saying that TSA “is broken badly.”

While many industry experts agree that the TSA is helpful, they also see areas where the agency needs to improve.

According to Jeffrey Price, Aviation Security Teacher at the Metropolitan State University of Denver:

“The TSA is an effective deterrent against most attacks. If it’s a security theater, like some critics say, it’s pretty good security theater because since 9/11, we haven’t had a successful attack against aviation.”

This summer, nearly 2 million people per day have flowed through TSA checkpoints. On weekends and holidays they can be teeming with stressed-out travelers. During the middle of the week, they are less crowded—they hum rather than roar. Most travelers accept any inconvenience as the price of security in an uncertain world.

Additionally, many travelers blame the difficulty of travel on the COVID-19 pandemic, not on the security apparatuses. They understand that those technologies are there for their security and not to hassle them. That’s why every time an airport official asks them to do something, they obey as they see the reason for it.

In 2016, a bomb ripped a hole in a Daallo Airlines plane shortly after takeoff, killing the bomber but 80 other passengers and crew survived. Somali authorities released video from Mogadishu’s airport that they said showed the man being handed a laptop containing the bomb.

In 2018, a Delta Air Lines baggage handler in Atlanta was convicted of using his security pass to smuggle more than 100 guns on flights to New York.

The following year, an American Airlines mechanic with Islamic State videos on his phone pleaded guilty to sabotaging a plane full of passengers by crippling a system that measures speed and altitude. Pilots aborted the flight during takeoff in Miami.

Those incidents highlight a threat that TSA needs to worry about—people who work for airlines or airports and have security clearance that lets them avoid regular screening. Pekoske says TSA is improving its oversight of the insider threat and is rolling out a system that will trigger immediate alerts based on law enforcement information.

TSA Rules: To Maintain or Loosen Up A Bit?

Clint Henderson, Senior News Editor at The Points Guy (TPG), says while some of the TSA’s rules seem a bit excessive, on balance, he thinks they’re overall effective. He states he and his team at TPG actually feel safer at airports or whenever they’re traveling by plane.

However, he also thinks maybe it’s time to relax some of the absurd—and sometimes even traumatic—rules a little bit.

In the years after 9/11, the phrase “flying while Muslim” came to encompass the increasingly common racial profiling and sideways glances many Muslims experienced at airports. High-profile cases saw Muslim travelers ejected from flights for discussing the safest seats on the plane, wearing shirts with Arabic writing, or praying prior to take off. The TSA maintains that Sikhs wearing turbans, or women wearing hijabs may be asked to remove their head coverings in a private screening area.

Racial profiling extended to Black and Hispanic travelers, too. In some instances, airport officials just pull aside anyone who doesn’t look “presentable” based on their personal preferences.

Sometimes, even if TSA agents don't discriminate, the technology they use might. According to a 2019 ProPublica report, the agency's full-body scanners often return false alarms for hair styles popular with Black women, forcing them to be subjected to hair pat-downs.

With all the different ways that deadly chaos could happen on airplanes after the 9/11 attacks, the fact remains: Most of the time, it hasn’t. The act of getting on a metal machine and rising into the air to travel quickly across states, countries, and oceans remains a central part of the 21st-century human’s travel experience, no matter how arduous it may be.

… and while the post-9/11 global airport security apparatus has grown to what some consider “unreasonable” proportions, it will never neutralize all threats—or even be able to enforce all the rules it has written.

What’s important is that positive change has taken place onboard flights, where there is now a more robust “culture of security” among passengers.

According to Steven Hooper, Assistant Professor of Global Security and Intelligence at Embry-Riddle Aeronautical University, that has probably been the most significant change, as people are willing to get involved now for safety and security.